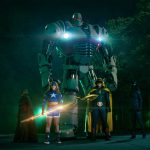 Superhero movies and television shows are incredibly popular. They attract a substantial amount of attention and have helped studios and networks generate a great deal of revenue. Stargirl is one of the newest series developed and launched by DC. The show is geared toward a teenage audience, but adults can enjoy it as well. Stargirl has been released on different web streaming platforms. It also aired on The CW television network. Check out this list of four characters who are featured in the series.

The show, which is produced by Geoff Johns, features Courtney Whitmore, a teenage girl whose alter ego is Stargirl. The series begins with Courtney moving from California to Nebraska after her mother remarries. She finds out that her stepdad was once a superhero, and she becomes a superhero herself when she stumbles upon a cosmic staff. Courtney is played by Brec Bassinger.

Bath Chapel is a brainy girl who goes to the same school as Courtney. Beth and Courtney develop a friendship. They both end up becoming part of the Justice Society of America (JSA), a team of superheroes who fight crime and push back against injustice. Beth’s alter ego is Doctor Mid-Nite. As Doctor Mid-Nite, Beth dons goggles that enhance her vision and generate holographic projections. Beth is portrayed by Anjelika Washington.

Rick Tyler is a troubled adolescent and the son of Rex Tyler, a superhero named Hourman. For a long time, Rick was unaware of his father’s past or even who his real father was since he was raised to believe that his maternal uncle was his biological father. Rick eventually learns about Hourman and continues his father’s legacy. As Hourman, Rick can manifest extreme strength, move at fast speeds, and remain extraordinarily durable for sixty minutes. Cameron Gellman is the actor who plays Rick.

Pat Dugan is Courtney’s stepfather and a former superhero named Stripesy. He rejoins JSA when his stepdaughter, StarGirl, becomes its new leader. He builds and wears a robotic armor called S.T.R.I.P.E. and uses it to serve as his stepdaughter’s sidekick. The armor has numerous defensive capabilities, and Pat uses those capabilities to protect Stargirl. Luke Wilson is the actor who plays Pat.

Stargirl has impressed both critics and viewers alike. The actors and actresses who star in the show portrayed their characters to the best of their ability.

Visit us to know more about WOW TV plans

0 0 0 0
Previous : Top 5 Comedy Movies of Govinda
Next : What You Need To Know About Becoming an Entertainment Lawyer Like John Branca UCLA